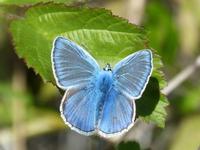 The Palos Verdes Blue Butterfly, native to the Palos Verdes Peninsula (California) is considered to be one of the rarest butterfly species in the world. These distinctive, fuzzy butterflies have a modest wingspan of only about an inch. The male’s top wings are bright silver-blue outlined in black and the female’s dorsal wing is brownish gray. Their eyes resemble black pearls and their antennae are striped black and white.

To facilitate its survival, about 1,000 captive butterflies and caterpillars were released into a butterfly habitat that had been restored and protected by the local Land Conservancy. Two days after the first release in April, both mating and egg laying were observed, giving scientists and conservationists hope that this release will in increase the Palos Verdes blue butterfly population in the region.

Millions of dollars were spent acquiring, restoring habitat by installing host plants (deer weed and rattle pod plants), removing invasive species, and creating water sources. Much work still needs to be done to maintain the health of the Blue Butterfly habitat. If you live near Palos Verdes and want to help, you can Visit pvplc.org, or call: 310-541-7613.

The Nearly Extinct Sacramento Mountains Checkerspot Butterfly Needs Help
Is it a dried-up leaf or a butterfly?
More than 1,000 endangered Palos Verdes Blue Butterflies have been released into their native habitat
In search of reasons for the recent decline in monarch butterfly populations
Climate change could cause decline of some alpine butterfly species
Watch a Breathtaking Monarch Butterfly Swarm