Grizzly Bears, Shoplifters, and Avalanches Unravel the Mysteries of Butterflies 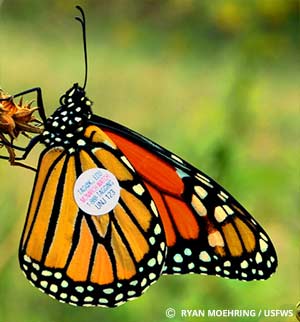 People have wondered for a long time exactly where do butterflies go. These agile little aviators are just too quick to follow on foot. Hang gliders and planes are useless in pursuing such artful dodgers. Their actions are as erratic and unpredictable as the guest of honor at a Rocky Mountain Oyster festival. They often seem to change their minds in mid-flight for no apparent reason. But this in fact is far from the truth.

Marking, or in some cases 'tagging,' butterflies is nothing new. It dates back around four thousands years to the silk merchants. In order to keep track of their breeding stock, the ancient 'Silkers' would paint identifying marks on the wings of their charges. This served to eliminate inbreeding within the population. It must have worked, for there sure is a lot of silk that has come out of the Orient since then.

Then some years later the question was proposed, "Where do the Monarch butterflies go in the winter?" To understand this problem pioneers such as Professor Urquhart from Toronto began to mark migrating Monarchs in hopes to answer the mystery. He began shortly after World War II. It wasn't until the late 70's that he could prove that the Monarchs from Canada were actually the Monarchs that clung to the trees in Mexico all winter long. The problem was getting a reliable marking method. Some folks tried to punch holes in the wings to mark individuals. The integrity of the wing was compromised and caused them to deteriorate. This naturally inhibited flight and rendered them useless. Professor Urquhart devised a paper tag that was fixed to the wing and eventually proved his theory.

As with everything else, problems developed. Some people raised concerns that the tag would throw off the warning color pattern of the Monarchs and subject it to attacks by misguided birds. The newest problem facing tagged specimens is at the overwintering sites. The local inhabitants found that they could sell recovered Monarchs to the rich tourists and actually make a few pesos. There is even one group in Southern California that wants all tagging stopped. They felt that they had to pay too much for their butterflies (author's note here; DUH- don't buy them). If the interruption of some already realized scientific data is sacrificed so someone can purchase some food for their family, I do not feel that a capital crime has been committed. The answer may be to tag as many Monarchs as possible and bring down the value. If in fact, this is a problem. To eliminate these pitfalls a Canadian Lepidopterist borrowed a few ideas and has revolutionized butterfly tracking. With ideas from tracking Grizzly Bears, stopping shoplifters and Swedish avalanche rescue crews, a new age has developed.

Jens Roland and his colleagues study the Apollo butterflies in the high meadows of the Rocky Mountains. This crew from the University of Alberta have been trackingÂ Parnassius sminthiusÂ with radio transmitters. Sure a tracking collar used on the resident Grizzly Bear population would slow their flight considerably. Roland uses a transmitter as fine as a human hair. The three-inch-long aluminum wire has a pinpoint diode fixed to the center. The total cost for this high-tech apparatus including labor is about $30.00. The transmitter is then glued to the abdomen of the 'tagged' individual. It does not effect flight. The Apollo butterfly weighs about a hundredth of an ounce. The transmitter weighs about a thousandth of that. We're talking small here.

Tracking utilizes "Harmonic Radar" commonly used in retails stores to stop shoplifting. The store tag attached to an item will trigger the scanner if you try to beat the system. Of course carrying around one of those huge walk-through scanners does slow down your pace in the high Rocky meadows. So Roland uses a battery-powered tracker that weighs about five pounds. It is the same tracker used in Sweden to locate avalanche victims. But there is a down side to all of this, the range is very limited. False readings can be generated from resonating crystals in certain nearby rocks. As with everything else, an invention is obsolete the moment it is created. There is always room for improvement and the crew from Alberta is already improving the design.

Why is any of this important? Global warming is one factor. Although the Apollo habituates a small geological area, warming trends allow treelines to climb higher up the slopes. Unfortunately this causes the meadows to shrink and fragmentize. Their suitable habitats separate or vanish. Can they find other areas before they meet their demise? Will they exist with out the biotic bridge from one meadow to the next? This is just one of the questions Roland and his colleagues hope to answer. Are theÂ ParnassiusÂ flight patterns haphazard as they seem? Or do they actually know what they are doing? Studies so far have demonstrated vast differences between male and female patterns. Now we will be able to find out with facts, and not just rely on theory.

With time, this new age of tracking will prove useful in tracking all butterflies. Perhaps then we may understand just a little bit more about these wonderful creatures that still seem to outsmart us.