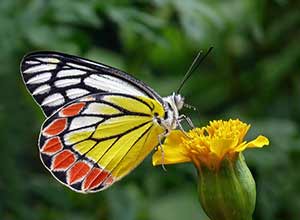 Check a plant list in any butterfly gardening publication and you're sure to find marigolds, especially French marigold (Tagetes patula). What makes this old-fashioned species so desirable to butterflies?

Compared to pompon-type hybrids, the French marigold remains close to its wild relatives in Mexico and Central America. A member of the composite family, it has a daisy-like cluster of tube flowers, surrounded by a single (or double) row of petals. A medium-sized butterfly, such as an American Painted Lady, can comfortably perch and sip nectar from the many florets.

Although a butterfly may be drawn into a garden full of bright orange and yellow hybrids, it won't find easy access to nectar in the frilly blooms. Triploids, which are infertile crosses between French and African (T. erecta), are unable to set seed, so they can keep blooming for months. As you might suspect, they have nothing to offer pollinators.

Out of the New World

Should you find yourself in a Mexican village for El Dia de los Muertos (Day of the Dead, November 1st), be sure to visit the local cemetery. Youï¿½ll see elaborate wreaths, festooned with orange and gold marigolds, on the gravesites, as families hold candlelight vigils to welcome the souls of departed loved ones.

There are about fifty species of annual or perennial marigolds from the Southwestern U.S. to Argentina, with most species occurring in Mexico and Central America. Marigolds were taken to Europe during the sixteenth century by Spanish conquerors. When Huguenot refugees introduced T. patula to England in 1573, the flower gained the name of French marigold. Thomas Jefferson planted French marigolds at Monticello in 1812, and they grow today at Old Sturbridge Village in a recreated nineteenth-century garden.

The equally misleading name of African marigold may refer to the fact that T. erecta, returning with the Spaniards, became naturalized along the North African coast. It was introduced from Africa into France in 1535, when the armies of Emperor Charles V fought in Tunis. Burpee calls this species American marigold.

To further muddy the geographical waters, the genus Tagetes derives from the Etruscan deity, Tages, grandson of Jupiter, whose specialty was soothsaying.

Used to heat, drought and lean soil, marigolds reward the most casual of gardeners--perhaps a reason for their enduring popularity. Seeds can be planted outdoors when the soil has warmed, or started indoors and transplanted in early summer. Space seedlings six to twelve inches apart; don't overwater or you'll get leggy plants with fewer blooms. Plant in masses to attract butterflies, and deadhead to prolong bloom.

Marigolds are used in household crafts and in cooking. Their flowers can be boiled with alum mordant to make a vivid yellow dye for wool and silk yarn. The citrus-scented leaves of signet marigold (T. tenuifolia, also known as T. signata), can be dried for potpourri. Signet marigold's tiny, edible flowers brighten salads or decorate a cake.

And Mexican tarragon (T. lucida), also known as mint-scented marigold, Mexican marigold mint or cloud plant, has aromatic leaves that can be used as a substitute for French tarragon or as a stimulating tea.

It's as a natural insect repellent, though, that marigolds have gained fame. They've long been interplanted among vegetables and roses to deter whiteflies, aphids and soil nematodes, and to attract beneficial insects. While their strong smell gets credit for repelling above-ground pests, the action underground is more complex.

Chemicals in root secretions of marigolds, especially T. patula, make nematodes ineffective by inhibiting their detection of target plants (such as potato). You may be able to rid the soil of nematodes by densely planting an area with marigolds, then turning the plants under and letting the soil lie fallow for the rest of the season.

At least a couple of seed companies promote the insecticidal qualities of marigolds. Burpee's offers T. patula ,Nema-gone, a fast-growing plant with golden flowers. Richters sells Mexican marigold (T. minuta), dubbing it the Weedkiller. This plant, which rarely flowers in temperate zones, packs an even greater punch: in addition to its effectiveness against nematodes, mosquitoes and other pests, it has been shown to kill noxious weeds, such as ground elder and bindweed, that are growing close to its roots.

Thanks to the efforts of W. Atlee Burpee's son, David, marigold offerings have been greatly expanded during this century. Of the 29 AAS (All-America Selections) medals awarded to marigolds from 1933-50, fourteen were Burpee introductions, including the still-popular T. patula "Naughty Marietta" (1947).

One of this year's AAS Bedding Plant Award Winners is T. patula, Bonanza Bolero. Its large (2-1/4") double flowers are distinctive because of their irregular gold and red pattern, with the red markings on petal tips rather than as vertical stripes. The plant reaches a foot high and up to two feet wide. It is available from Park Seed.

Southern Exposure Seed Exchange offers T. patula ,Tashkent #1. During a People-to-People trip to Uzbekistan in 1992, grower Bob Bell collected seed from French marigolds growing next to an old Muslim school. One can only guess how these flowers made their way halfway around the world, to grow in obscurity until an heirloom aficionado appeared! Tashkent #1 is said to be unusually fragrant, with numerous single-petalled flowers (to 2" across) that are velvet mahogany with a fine orange border and yellow center. As petals mature, they change from mahogany to orange-red. The plant grows to 16", with dense, deep-green foliage.

Pesche's Gold is an intriguing selection of the usually-hybridized African marigold, new this year from Seeds of Change. Single golden petals are lightly ruffled along the edges; blooms are large (2-1/2") on stocky, broad-leaved plants (to 2"). The Seeds of Change catalog notes a strikingly similar offering (now unavailable) in a 1918 British catalog, Suttonï¿½s Seeds.

Marigold Choices for a Butterfly Garden