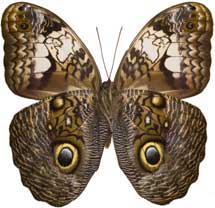 Owl butterflies of the genus Caligo are known for their huge eyespots, resembling the eyes of an owl. They are found in Central and South America, and Mexico, primarily in the rainforests. They are big butterflies, from 2.5 to 8 inches (65-200 mm).

They are not long-range fliers, going only a few feet at a time. Because of this, they are easy prey for birds. They usually fly at dusk, at a time when there are fewer predators about. Predators are further discouraged by the eyespots, which resemble lizards or other amphibians. If attacked, they are more likely to be attacked at the outer edge of the wing, rather than the body.